Grace International School (GIS) is a complicated mix of culture and custom. There is the international community that consist of students and staff form countries all over the world and then stuck in the middle is a bubble of Thai nationals. There are Thai teachers that of course teach the language and customs of the land and there are Thai administrative staff that help the school stay connected and in tune with the community and government. All of these staff members are Christians. Then there is a third Thai community. What we would call the blue-collar staff, landscaping, security, custodial, and kitchen staff. A few of these staff members are believers but many of them are not. Kevin is the supervisor for most of these areas.

Kevin has truly enjoyed working with and getting know the members of his team and they are enjoying his leadership (completely the grace of God). The week before Christmas tragedy struck his department. On the way to work one evening Khun Tidt, a security guard, was killed in a scooter accident leaving behind a young wife, a 7 year-old son and 5 year-old daughter. As far as we know Khun Tidt and his family are not believers. On December 22 we attended a traditional Thai Buddhist funeral and the experience left us heart-broken.

We followed the two song taos (pick-up taxis) that were full of the Thai staff from the school to a Buddhist temple north of the city. Once there we had the opportunity to greet Khun Tidt’s widow and children. We were surprised to see that his son was dressed in a Buddhist monk’s robe complete with shaved head. We were told that this was customary for a son or close family member to go through the rites to become a monk to gain favor for the deceased. This practice may only last for a few days but they believe it will still create merit for the next life. The coffin was placed in an ornate funeral cart surrounded by flowers. His picture was on placed on a separate wheeled cart and it too was decorated with flowers. 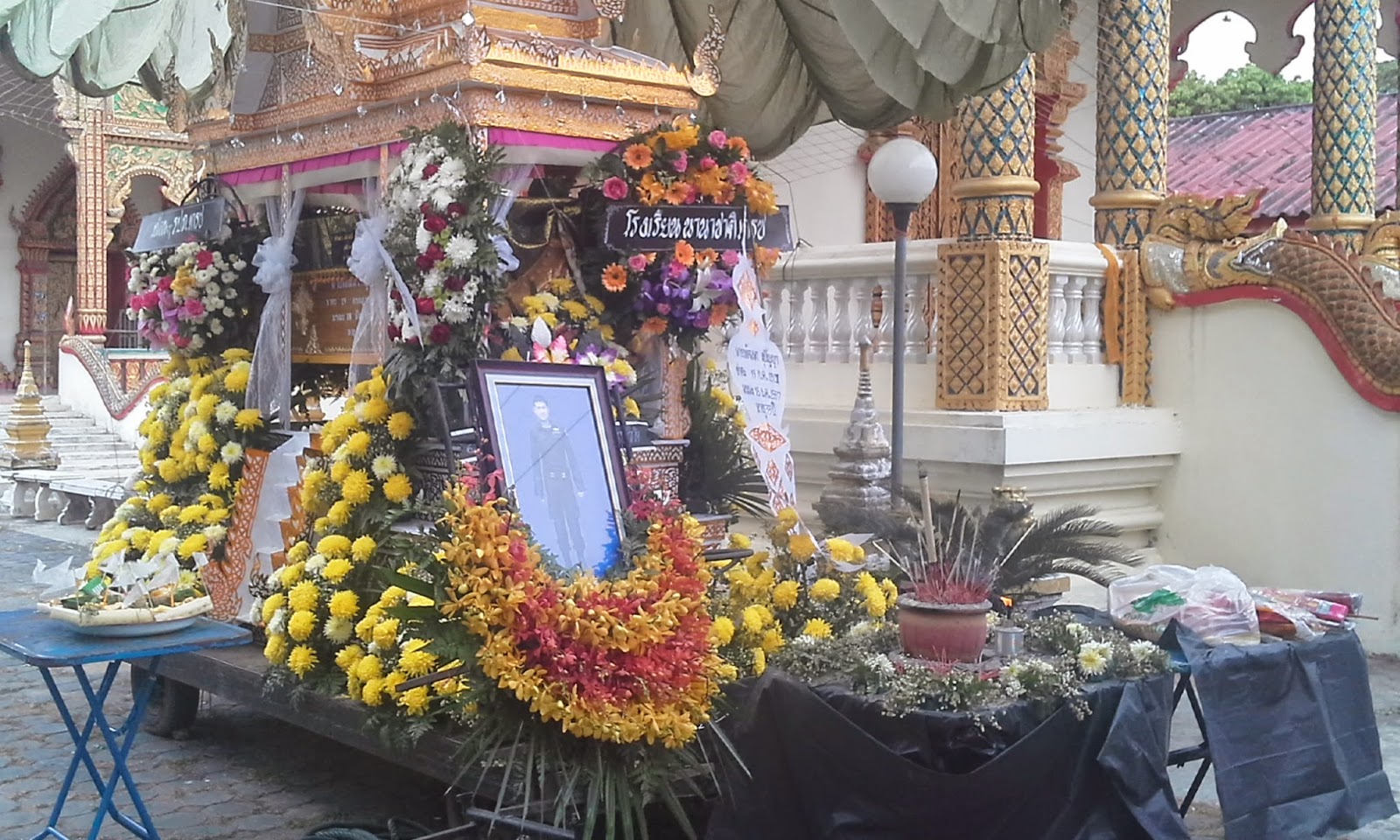 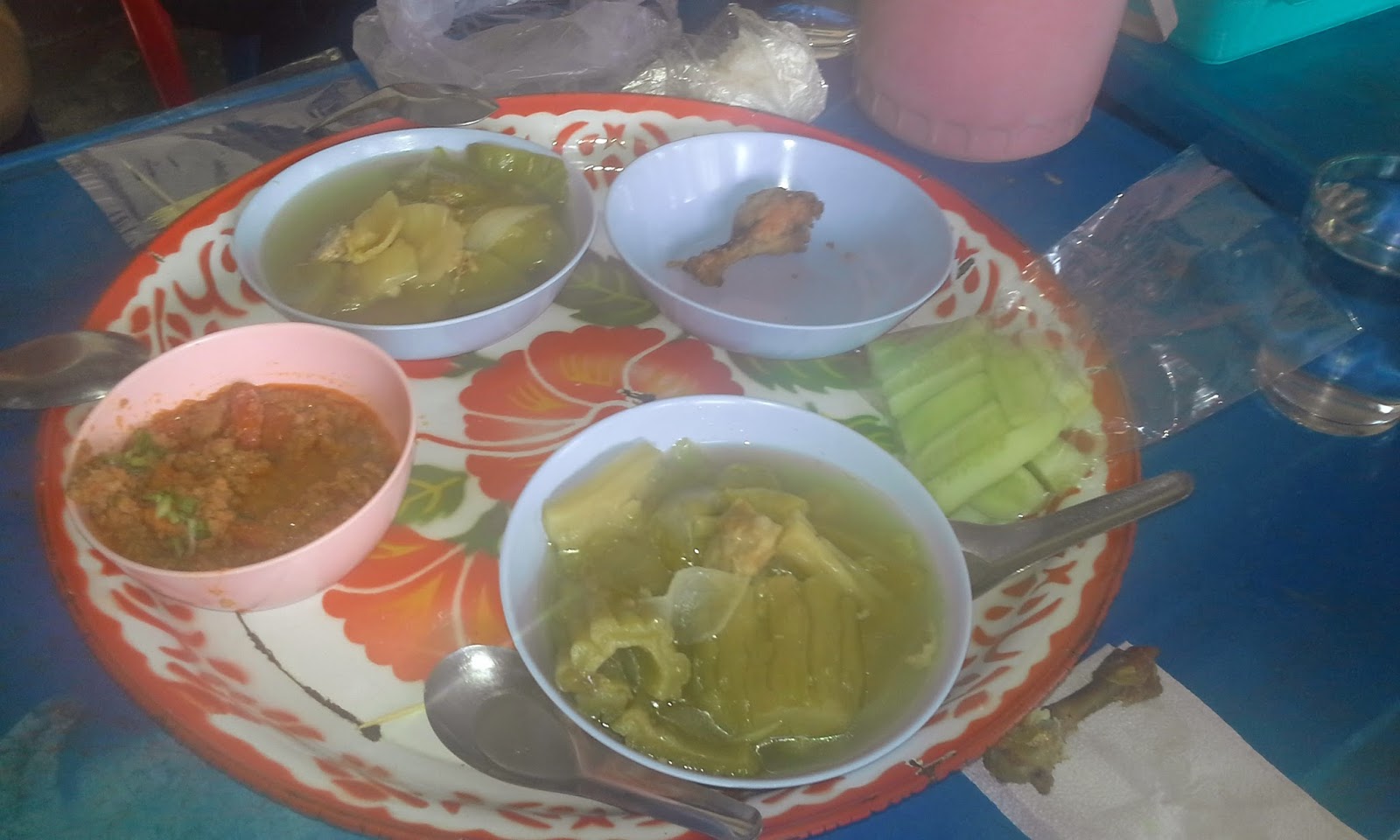 We ate a lunch of bitter vegetables, pork nam prik, chicken wings and sticky rice and then the superintendent of GIS gave the eulogy which was translated into Thai. This concluded the first portion of the funeral and it was then time to move to the crematorium for the cremation ceremony. Buddhist monks stood on the four corners of the casket sprinkling water and chanting. After this the funeral guest took up the two long ropes that were attached to the front of the ornate funeral cart and began pulling the cart toward the crematorium. We all walked together while music played. Neighbors came out and paid their respects as the procession passed.

At the crematorium the passing over ceremony began. They believe that this will cause the spirit of the deceased to pass from this life to his next. What the next will look like is determined by how much merit he earned while living. Honored guest are asked to give merit on behalf of the dead by presenting the monks with pieces of their robes. One by one the guest come forward and place the robes on a table in front of the funeral cart. A long ribbon was draped from the casket to the table connecting the two. Several times during this process the monks came forward to chant and pour water from one vessel to another symbolizing the spirits passing over.

The last portion of the passing over ceremony was when my heart completely broke. A banana was placed on the funeral cart and together Kuhn Tidt’s wife and children cut it in two. This symbolized their desire to sever their relationship with their husband and father. As painful as that is to think about what came next is when I lost it. As soon as the banana was cut Kuhn Tidt’s widow grabbed the children’s hands and ran to an awaiting scooter. A family friend was waiting with engine running so that as soon as the three were on board he sped away as quickly as possible. The family ran not out of grief but out of fear. They were fearful that the spirit of the man that they loved would follow them and haunt them. Can you imagine losing a spouse or a parent and the love you had for them being overwhelmed with fear? I cannot explain how deeply this hurt me to watch.

Once the immediate family left, the cremation ceremony began. The casket was moved from the funeral cart and placed in the crematorium. The ornate cart was placed on a funeral pyre to the side. The casket was opened and the body was washed with coconut water. They are fearful that the spirit will return to the body at this point and the washing of water prevents this from happening. We were all invited to come forward and pay our final respects. We were given paper flowers that were to be placed in the coffin. Then the coffin was closed and the door to the crematorium was shut. So that the fires could be ignited. 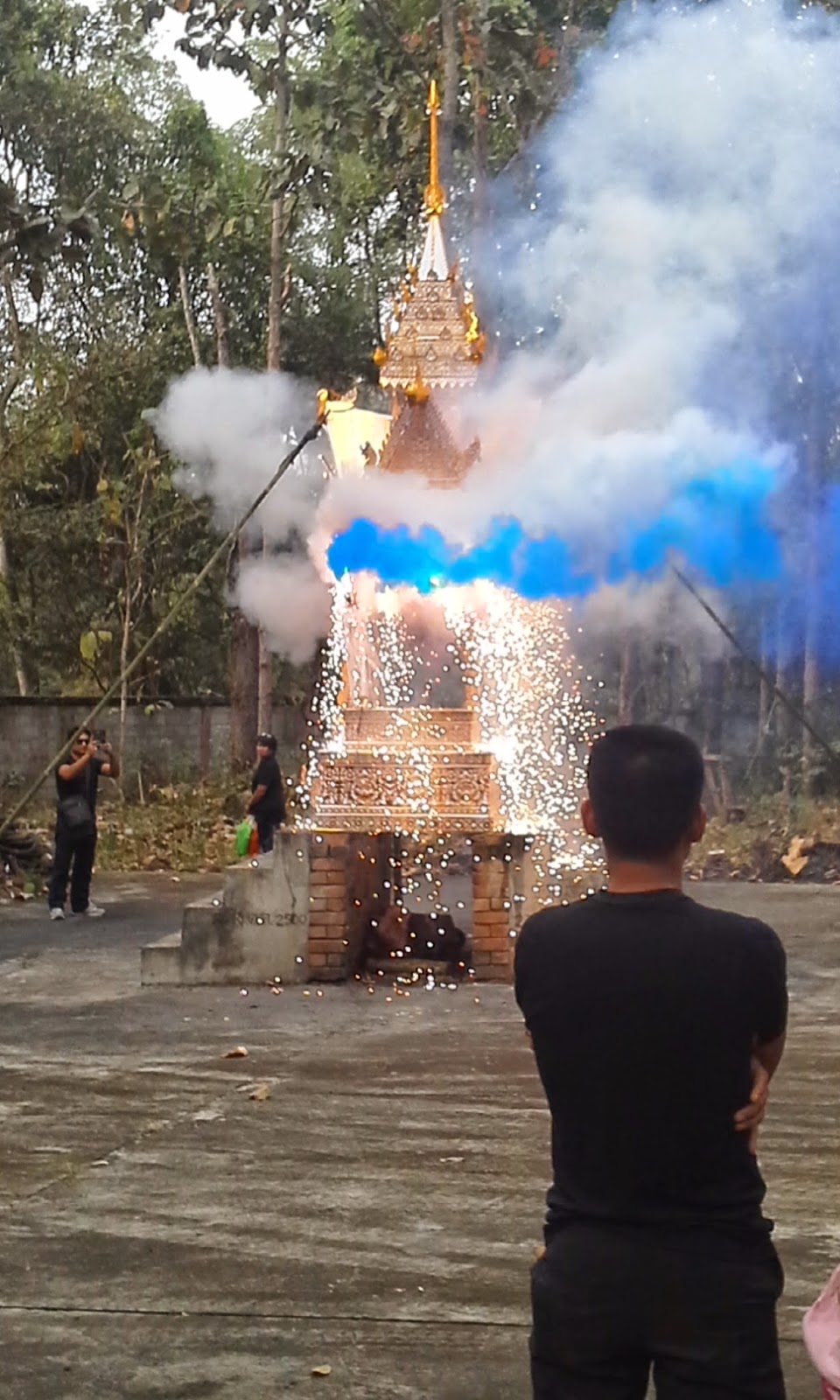 The ornate funeral cart was the first to be burned. Fireworks built into the cart ignited the flames and produces a loud wailing sound as if the cart itself mimicked the grief and anguish of the crowd. To say it was eerie is an understatement. From the burning cart a cord had been strung to the crematorium. A spark traveled through this cord a started the fire beneath the coffin.

At this point the crowd began to disperse. As we turned to go we noticed that fire on the funeral cart had died down and people began to frantically pour accelerant to reignite the flames. We were told this was a very bad omen. This showed that the deceased was not ready to leave this life. Fear was compounded on fear.

It was one week ago today that Kevin and I attended the funeral. We are still processing. We have come face to face with the hopelessness, the lostness that surrounds us. Kuhn Tidt’s fellow security guards are shaken to their core. Some have already said that they have seen his spirit at work creating fear.

We covet your prayers as Kevin and the rest of the Christian staff at GIS try to breath life giving truth into their dark and horrifying world. May the God of all truth, love, and mercy set them free from the shackles of fear that the enemy is using to keep them blinded to life.

It all began with a little bit of faith, the faith of a mustard seed really. I have followed God in ministry here, near and far and now 30 years later I feel like I am starting all over again. God, the Author and Finisher of my Faith, is taking me back to basics and I am rediscovering the truth of who He is and who it is He wants me to become.

Me and My Crew